Today I am going to be reviewing the Maximuscle Cyclone Meal Replacement Bar.

As people live more and more hectic lives, the ability to fit in regular, nutritious meals is becoming more difficult. The supplement industries solution to this problem is shakes and bars (I never know how many of these 'problems' are created by them rather than being actual problems), to make eating meal on the go a bit easier.

I will say that at this point I'm not a fan of bars as meals. They're to much like chocolate bars (bad association), the ingredients are often questionable and they're nutritionally a bit 'grey'. Its hard to get one that really drivers to fill a specific need (the exception may be Biotests Finibars that I'm currently testing).

However I do understand their appeal and that many people do use them to good effect. With that In mind I decided to take a look at the Cyclone bars.

I opted for the Dark Chocolate flavour. A quick scan of the packet tells me I will be getting the following from the 60g bar,

Not to bad really. carbs are a little high for something I would consider a 'snack' but the protein and fibre are a plus. Also quite a lot of sugar and especially sugar syrup in the ingredients! 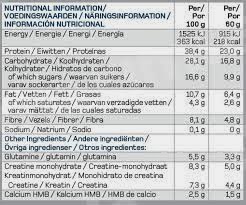 Upon taking the bar out it looks very similar to any other protein bar. A quick feel of it reveals a cakey like texture. Upon eating the bar it feels a little stodgy and a bit 'grainy'. Taste is pretty good and the flavour description is pretty accurate (nice with a brew).

However after eating it I didn't really felt like I had eaten anything. Considering that for the same macros I could have had some chicken and nuts (with less carbs and more protein) which would also have filled me up a bit more. the price is a bit of a killer as well. The cheapest I found them for was 18.95 for 12 (£1.57 per bar), still quite pricey if you base it on a food shop.

Overall the bar isn't bad at all. There are certainly a LOT worse out there and not much better.

Personally I would rather have a small meal or a shake with a bit of fat added as it satisfies me more than the bar. However if you were having a bit of a diet meltdown and you HAD to have a chocolate bar or you would break down (try a square of 90% chocolate, a protein shake or some sugar free jelly first, or man up), then its a much better alternative than a Mars bar. The bar would also be ok if you were using IF (intermittent fasting) and wanted a little something solid in your stomach as part of your workout nutrition protocol (however they are better alternatives for cheaper).

All in all, not a bad protein bar, but food still has my vote.