Today I want to give you my verdict on the USN protein dessert. 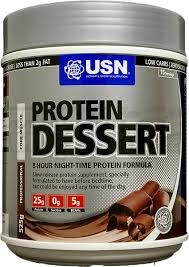 A lot of manufacturers have been coming out recently with healthier alternative to desserts.

I have a mixed view on these (same as paleo desserts etc). Are they better than normal desserts? Absolutely! If people were to eat these alternatives instead of the junk versions as a treat now and again, they would be in a lot better shape! However I have just a few thoughts,

However they are still better than the junk versions!!

Ok, so I gave the USN Protein Dessert a good few tests and was over all, quite pleased. Before I get into the actual product, here is the nutritional breakdown.

So basically, per serving we have,

Not bad at all for a dessert!

Ok, so onto the actual product!

I mixed the pudding up in a few ways to experiment. These were as follows,

The first three were a complete success. The product mixed easily and formed a very nice consistency. Obviously it tasted much better with milk than with water, however adding almond milk was a great alternative (and added a nice nutty texture). As I said I also added peanut and almond butter for taste and to bump up the healthy fats a bit. This was fantastic! I also added mixed dried fruit and nuts which were a great addition (one was for fats the other for carbs).

I also tried to make ice cream but I failed at that miserably! I'm not saying that I can't be done, it was just beyond my culinary expertise. However I did manage to make a thick chocolate sauce that went great on all types of stuff!

The taste itself is pretty good. It just tastes like a standard chocolate protein powder. I am sure there are a million and one ways that you could enhance the flavour and in that lies its strength.

The USN Protein Dessert is a great little product that I would recommend that you give a try as long as you don't go nuts and eat the full tub!