Today I would like to talk about Biotests competition protein/energy bar, Finibar.

Finibar has been designed for endurance and top level athletes to give them an easily digestible source of energy for long and demanding training sessions.

I have been using the Finibar for a good few weeks now trying both flavours (Dark Chocolate and Peanut Butter Crunch). I have tried them with both weights and jits sessions and a combination of timings etc. Before I get into my experience of them, lets take a little look at the nutrition. 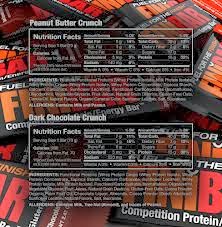 Each bar (70g) has roughly
Now for a protein bar this is terrible. So remember that this isn't a protein bar! This is designed to be a energy/carb source for tough training sessions.

With that in mind these are pretty good.

Upon taking the bar out from the wrapper I noticed that they were very thick and a little stodgy feeling. Now this normally isn't a good sign when it comes to a protein bar as it generally means that the bar will be tough and dry. I broke the bar in two, to inspect further. It was bloody tough! It looked nice enough, more like a brownie than a bar (I first tried the Dark Chocolate Crunch). As I bit into it I was pleasantly surprised. It was a little chewy but wasn't dry or bitter like some bars, it went down easy and I didn't need to wash it down with 10 cups of water like I have had to in the past with some bars. It also actually tasked like chocolate rather than chocolate whey protein, which is unusual for a bar!

Now normally I don't like having solid food really close to a training session as it makes me feel bloated and sluggish. I had no problem at all with the Finibar, even when taking before sparring sessions. The bar seemed to digest really quickly. I messed around with the timing of the bars and I felt best taking them about 30 mins before my first workout shake (15 mins before training). If it was any closer I did get a bit of digestion issues with having so much in my stomach at once (leading to complaints from training partners).

So in conclusion, if you are looking for a good, clean, easily digesting source of carbs for competition day or have the budget to use them for harder training sessions, give them a go. If you are a little tighter on budget then stick to peri workout shakes (for my take on this, read my latest article in Train Hard, Fight Easy magazine (soon to be known as TRAIN!).