Hey Guys,
Today I want to talk about Biotest Flameout. 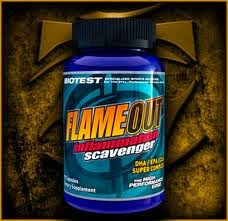 Flameout is a high concentration fish oil to help prevent and stop inflammation within the body. Here is a bit of company blurb on it,

Ask a hundred doctors or scientists about the causes of heart disease and the one thing the vast majority will agree on is that it's a disease of inflammation.

One way this inflammation can characterize itself is by the proliferation and congregation of white blood cells known as macrophages. These macrophages play a major role in the pathogenesis of atherosclerosis, which is characterized by plaques that reduce blood flow and cause further damage to blood vessels and the heart.

Asthma too, like heart disease, is also a disease characterized by inflammation.

In fact, a whole bunch of chronic ailments that affect Americans are caused by inflammation.

How about just plain muscle soreness? Training damages muscle. Muscles get inflamed. Inflammation promotes more damage. The more damage, the more inflammation. It’s a vicious, inflamed cycle, and how the heck are muscles supposed to grow optimally if they’re constantly inflamed? They can’t.

Anyhow, America is in the midst of an inflammation epidemic!

A lot of it can be traced directly to our diets. Humans originally consumed a natural diet of 1 to 1 or 1 to 2 ratio of omega-6 fatty acids to omega-3 fatty acids. (Just to refresh your memory, omega-6s are those fatty acids found in just about every packaged food you can find, in addition to those cooking oils that permeate your cupboard, while omega-3s are those that we typically associate with salmon and other cold water fish.)

Unfortunately, because of extreme food processing, raising cattle on corn instead of grass, avoidance of fish in the diet, and plain ol’ greed and ignorance, the modern ratio of omega-6 to omega-3 is more like 20 or 30 to 1.

That’s a recipe for disaster.

At its most basic level, the problem lies with these primitive, rudimentary hormones called eicosanoids. These hormones are involved in pretty much everything our body does and if we ingest a lot of omega-6 fatty acids, we get eicosanoids made from omega-6s.

Trouble is, omega-6 eicosanoids are really pro-inflammatory. The body makes eicosanoids from omega-3 fatty acids, too, but these eicosanoids are very weakly inflammatory, if at all. As such, simply shifting the diet towards omega-3′s can do remarkable things for your health and performance.
Sure, you all know about fish oils and most of you, if you don’t take them already, have been strongly considering adding them to your daily diet.

That’s right, the fish oil you’re using is almost certainly most beneficial to women instead of men.
I’m sure you’ve all heard of DHA and EPA, which are two of the omega-3 fatty acids researchers are most interested in. They’re simply elongated and desaturated versions of alpha-linoleic acid.
Unfortunately, every fatty acid supplement we’re aware of contains a lot more EPA than DHA because fish naturally contain more EPA than DHA.

That’s fine for women because the biosynthesis of DHA is a lot higher in women than it is in men. Most researchers think it has to do with sex hormones, presumably estrogens. A strong stimulus with estrogens in lab subjects induces an increase in DHA status, while a Testosterone stimulus induces a decrease in DHA.

Men, of course, have a much higher risk of heart disease.

Sure, men have lower amounts of DHA — despite eating the same amount of fatty acids as women — but they have a higher incidence of heart attack (and presumably, other inflammatory conditions).

As such, men need more DHA than women! Several studies have confirmed that belief.

DHA, in addition to having a anti-arrhythmic effect, reduces blood pressure and according to at least one study, even increases HDL (the good cholesterol) by 29% while EPA reduces it by 6.7%!

Basically what all that means is that fish oil is really good for you. I mean REALLY good. If you don't know about the wonders of fish oil then I highly suggest you give it a quick google! Now if you are a grappler or combat athlete, you absolutely need to be taking fish oil on a regular basis! All martial artists that participate in live sparring know how much their joints ache and how hard recovery is. Fish oil aids that tremendously!

Now the problem with fish oil comes in the amount that you have to take to see a recognisable benefit. Research suggests that around 10g (not mg) of EPA and DHA a day is optimal for athletes. Now to give you an idea of how much that is, that's 10 capsules of regular fish oil. 10! That is simply to much for normal people (or just damn inconvenient). So the solution is to take a high strength fish oil and less total capsules but the same 10g of EPA and DHA.

I reviewed a similar fish oil to Flameout by Dr Dave Best. You can find that review HERE
In this review I high light why you should be taking fish oil on a regular basis and compare it to Flameout and Asdas own brand. Here are the details again for Flameout,

As you can see by the label, it has an extremely high content go EPA and DHA. This means that you only have to take 4 capsules a day to get the same as you would in 10 normal capsules. This right here is the main selling point of this product. If you can't stomach taking 10 normal capsules then this will allow you to more than half it. For a lot of people it is this convenience that makes it a winner, take 4 caps and don't worry about it for the rest of the day!

However as they say, convenience (and good products) come at a cost. For 1 bottle of Flameout it will cost you £35.99 for 22 servings. that means for it to last you a full month you will have to buy 2 bottles (£71.98). Obviously this will go into the next month as well but this is still a large amount for people to pay out.

So what's my verdict?

There is no doubt at all that Flameout is a great product. I felt great while I took it, had no pain in my joints and felt just as good (if not better) than using any other type of fish oil. I loved only having to take 4 capsules a day as it's simply one less thing to worry about.

I do think that the price maybe a little high for some however. Biotest is a premium brand and its products aren't cheap, they provide great products that work exceptionally well. However you can get similar (notice I didn't say the same) effects for a lot less money.

If you can live with taking more capsules then I would go for a cheaper option. If you want the best, then pay for the Flameout.

All in all, a very good product and one I have no problem recommending to anyone!

At Unorthodox Nutrition we pride ourselves on recommending the very best products to clients and everyone else! With so many bad and irresponsible products on the market, we are going to help you sift through them and pick the very best ones!

All of the reviews are;
If you would like to have a product reviewed please drop us a line via the contact form on this site or E Mail